What? Who Were They?
by Arnold Nethercott, UE

The simple answer to those questions is that they were the persons displaced by the War of the American Revolution (1775-83); and there were probably about one hundred thousand of them, people who were forced to leave their former places of residence in the Thirteen Colonies, late in the 18th century, because they had become "obnoxious" to their former neighbours.

American opinion before and during the War of the American Revolution was about equally divided between those for independence from Great Britain, called the Patriots; those for maintaining the ties between the colonies and Great Britain, commonly called "Tories" by the Patriots; and those who preferred a wait and see attitude, commonly called "mugwumps", by both of the other groups. No less a person than John Adams, second president of the United States after the War, estimated the even division of the three groups. The population of the Thirteen Colonies was about two-and-a-half million. 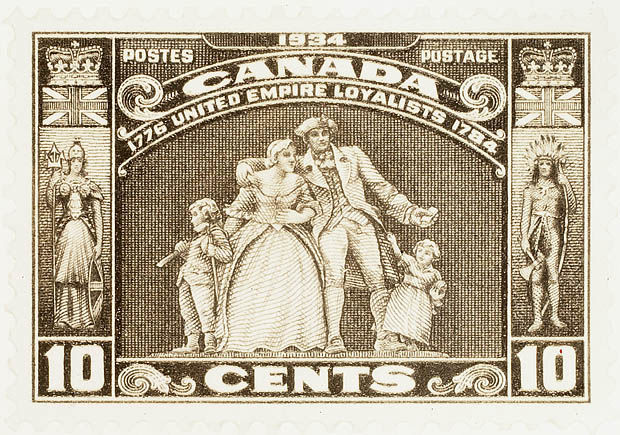 Great Britain had several other North American colonies, e.g., Newfoundland, Nova Scotia, St. John's (later Prince Edward) Island, Cape Breton, Quebec, East and West Florida. Its population was about eight million; so Mother Country and colonies were fast becoming rivals and dependency of the Colonies on the Mother Country was waning. If Great Britain was to retain its Empire, it was going to have to accommodate the new circumstances, and have wise statesmen, who could adapt the unwritten British consti- tution to them. Unfortunately, they were lacking in such statesmen and rulers.

The professional British and Hessian army failed to adapt to North American conditions and never truly defeated Washington's American Patriot (Continental Congress) Army. Great Britain was involved in military operations in several other places around the world, and the British gradually grew weary of the North American war, to the point that they decided to cut their losses and expenses, by 1782, when negotiation of the Treaty of Separation began. During the negotiations, the British attempt to negotiate lenient terms for their friends, the Loyalists, but the negotiators for the United States could not make binding commitments for the individual colony-states.
The Constitution of the United States had not been drafted, and was not drafted until 1789, seven years later. Most colonies disregarded the proposals for lenient terms, and wished to have nothing to do with people they regarded as traitors to the new nation. The old enmities died slowly, and thousands of Loyalists, perhaps as many as one hundred thousand, had their land and belongings confiscated, and were forced to leave their former places of abode.
If they wished to remain under British rule, they had to go to other parts of British North America, or back to Great Britain, or to areas where their past was unknown. Consequently, about thirty-five to forty thousand were evacuated via New York City to Nova Scotia (including the yet-to-be organized New Brunswick), and other Atlantic colonies.
About seven thousand, formerly residents of areas contiguous to the Province of Quebec, made their way overland to Sorel, Quebec, east of Montreal. Later becoming settlers in Western Quebec, later Upper Canada and Ontario. Some returned to Great Britain, perhaps as many as ten thousand. Some went to the British Caribbean islands, perhaps as many as twenty to twenty-five thousand-some attempted to settle in East or West Florida, but those colonies were handed over to the Spanish under the Treaty, and were not free to join the United States until the next century. And several thousand went to other parts of the United States and beyond the treaty line, separating the Indians from the Colonies, where people would not know of their past.
On the 9th of November, 1789, Lord Dorchester, Sir Guy Carleton, Governor General and Commander-in-Chief of Quebec and all British Colonies, stated his desire to place "a Mark of Honour", on those who had sacrificed so much for the preservation of the "Unity of the Empire", by affixing the letters "U.E." to their names, and of their descendants, of either sex. This "Mark of Honour" did not apply strictly to the population of the other Colonies, as it did not receive assent in those other Colonies, but was uniformly accepted in 1914, when the United Empire Loyalists' Association of Canada received its Federal Charter.
The order received tacit royal assent in 1987, when the Canadian Herald was established; he has accepted documentation for regular membership in the Association as sufficient to support a grant of arms (armorial beaarings) by the Canadian Herald.